A new Pokemon film is based on the “Great Detective Pikachu” game. 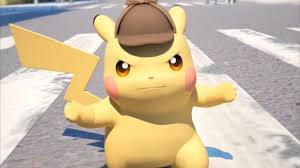 And words from the street say that popular Hollywood star Ryan Reynolds will the voice of Pikachu.

Then again, Detective Pikachu movie sounds like it’s going to be a break from Pokemon tradition in a number of ways.

The plot, according to Hollywood Reporter: “The story is kicked into gear when Smith’s character’s father is kidnapped, forcing the teen to team up with Pikachu in order to find him.”

Also heard that the Pikachu part for the film is gonna be “motion-capture” role. But we are not sure if Ryan will be handling that aspect either.

Pikachu does a Harlem in this battle, yo! [vid]

シンガポールオーチャードプラザ４階に新しいお店出来てた！ Posted by Jun Matsubara on

The Samurai Blue kit is so cool

Thank you for your interest in using HELLOASIA to get y

A simple preview of the Merlion LINE messenger stickers

Jepun Ah Beng here. How you guys ah. These few weeks no