Most Common Birthdates in Japan 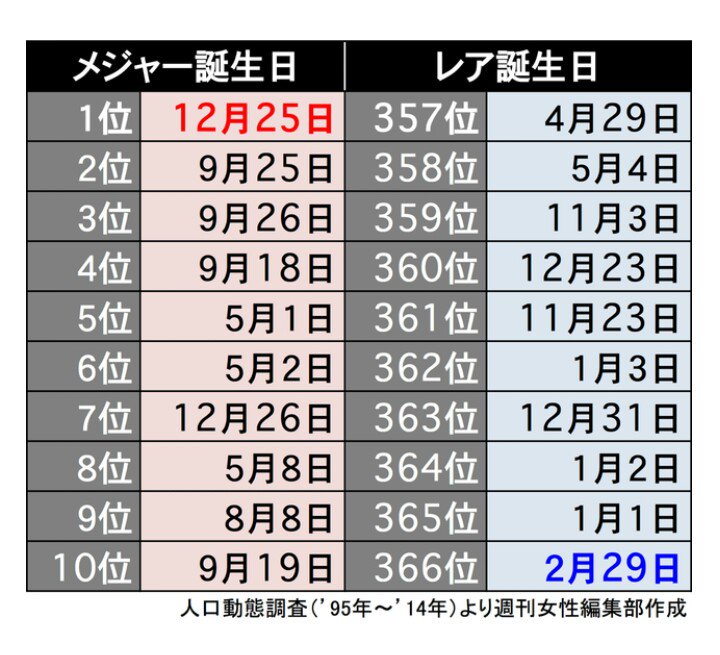 So the TOP 10 rankings would on the left pink column,
and the worst would be on the blue right column.

The Most Common Birthdates And I’m quite surprised that it would 25th DEC!?
WOW!!

I would imagine for this date.. the parents had tahan a bit so it would on that day maybe!? Coincidentally, on the 7th ranking we can see the 26th DEC people so

I think for this one quite legit.
The dates around 1st Jan would be the least common. So next time you meet anyone with birthdays around 1st Jan, they really uncommon so should congratulate them okae.

And for those who was born on X’mas?! Not only you lah!! Got so many more also can!!

Rockon Tokyo Tanjong Pagar’s Treasure Box and Gout menu is a must try!

Instead of a fine dining restaurant, looking for a place that’s hassle free, where you can

Meidiya Millenia Walk, would be their largest flagship store in Singapore

EVERY Japanese Convenient Store has so much Japan feel.

EVERY – Everything is here, and it’s 10AM~10PM. EVERY is a Japanese mini-supermarket and café located